Johannesburg to London Heathrow DIRECT from only R6,999 while seats last! Deal valid on Black Friday only, fare expires at midnight on 23 November…

Cape Town or Johannesburg to Windhoek from only R2,159 while seats last! Deal valid on Black Friday only, fare expires at midnight on 23 November…

Cape Town to Johannesburg / Johannesburg to Cape Town 1-way from only R599 while seats last! Deal valid on Black Friday only, fare expires at midnight on 23 November…

Price: from R599 (one way, all major routes, inclusive of 20kg checked luggage)

To celebrate Black Friday in 2017, Travelstart offered a 30% discount off all local flight routes on Kulula Airlines, and FlySafair flights starting from only R299 1-way. You can also book return flights to Thailand from only R5,499 aboard Etihad Airways.

One of the most well known Travelstart specials is the Mango Happy Day Sale. Another that attracts a lot of attention whenever it is run is the FlySafair R1 and R2 specials, which frequently results in the Fly Safair website crashing due the sheer volumes of visitors. 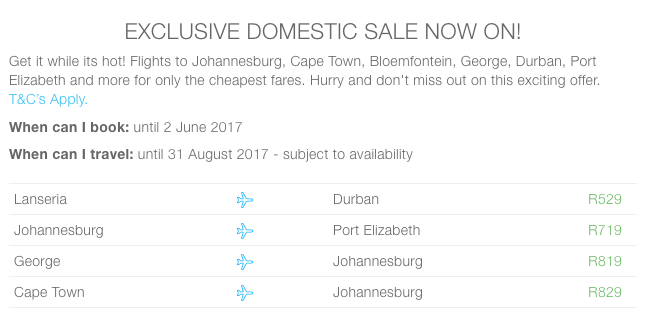 On 31 May 2017, Kulula.com ran a one-day-only 30% off domestic flights special, with awesome savings on flights between Johannesburg, Durban, Cape Town, East London and George.

On 5 June, Travelstart was offering a crazy FlySafair special, with domestic flights priced from only R299 1-way.

Additionally, as of June 2017, you can now get 50% off your Uber airport rides if you book your return flights through Travelstart or any of its affiliates’ sites, including FLYAirlines.

On 3 June 2017, Travelstart ran an amazing Etihad Airways Thailand Flights Special. Thanks to Etihad and Travelstart, you could book online and fly from as little as R4,999 return! In addition, you could also save up to 40% on your British Airways Comair flights to destinations such as Harare and Windhoek.

Travelstart also occasionally offers amazing deals on international holiday packages, such as 5 nights’ accommodation in a superior room at the Centara Watergate Pavillion, plus return flights to Thailand, from only R8,990 per person sharing. You could also get 7 nights’ accommodation in a Deluxe Room at the Phuket Graceland Resort plus breakfast and return flights from only R12,720 per person sharing.

Get the latest Travelstart specials first!

Keep an eye on our Facebook page to hear about the latest local and international travel deals first, or sign up for our newsletter to get the lowest flight fare offers delivered straight to your mailbox when they drop.

FLYAirlines. Helping you travel more for less in 2017.