Looking for cheap Condor Airlines flights and 2017 specials from only R8,409? Instantly compare international flight prices and book your own online, or find out more about Condor in SA here.

Condor Flugdienst GmbH, better known simply as Condor (Condor.com, not www.condor.co.za), is a German leisure airline based in Frankfurt and operating direct flights between Cape Town and Frankfurt. Founded in 1955, the airline has operating hubs in Berlin, Cologne, Hannover, Hamburg, Leipzig, Stuttgart and Munich. 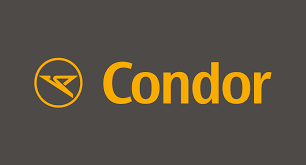 From its main base in Frankfurt, the airline operates regular scheduled flights to over 90 destinations across Africa, Asia, South America, North America and the Caribbean. While the airline is currently owned by the British based Thomas Cook Group, it also still partners with its former parent company, Lufthansa, through participation in the airline’s frequent flyer programme, Miles & More, and operating as interline partners.

Condor Airlines is Germany’s third-largest commercial airline in terms of its fleet size and annual passenger volumes. The airline operates a fleet of 42 aircraft, and was employing over 4,000 full time staff members across its various international operations.

The airline will soon be facing competition from the likes of KLM and Eurowings on the direct flight routes to Europe from Cape Town. 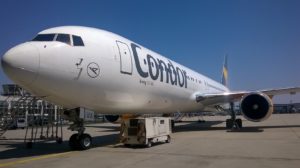 The airline has also indicated that it will be relaunching its summer flights from New Orleans during 2018.

During late October 2017, Condor is offering direct flights from Cape Town to Frankfurt from only R8,409, return, taxes included. Powered by Travelstart South Africa, FLYAirlines also gives you the ability to compare Condor flight specials against a host of other international airlines flying to, from and within South Africa.

Thanks to FLYAirlines, the cheapest international airfares and the fastest, most direct flight to Europe are now at your fingertips, 24/7, 365!

Simply type your preferred travel dates, departure airport and destination into the above flight search engine to get started. Then just complete your passenger details and pay online – you could be booked and ready to fly in 2 minutes flat.

But don’t take our word for it; why don’t you put our system to the test yourself today?