Looking to book the cheapest Eurowings flights to or from South Africa? Instantly compare flight prices and book online with FLYAirlines, or find out more about Eurowings SA here.

Established in 1993, Eurowings SA (www.eurowings.com) is a German low cost airline headquartered in Dusseldorf. The budget airline is wholly owned by the Lufthansa Group, making the airline a sister brand to the globally renowned Lufthansa Airlines.  Boasting a fleet of 60 modern, fuel efficient aircraft, the airline presently flies to around 80 international destinations with a strong focus on key cities in Europe.

Flight operations commenced on 1 January 1994, with the airline operating on behalf of Germanwings within the latter’s flight network at the time. The airline generally flies along the more economically contested and under serviced air routes, operating on a no frills basis.

The airline developed a low cost flights model for short and medium haul flights, and in 2015 the Eurowings and Germanwings brands were consolidated under the name of the former. Lufthansa initially owned a 24,9% shareholding in Eurowings up until 2001, increasing its ownership to 49% in 2004. It has been in operational control of Eurowings since 2005, and wholly acquired the low cost carrier in 2011.

Eurowings only has one subsidiary – Eurowings Europe. The airline is a member of the Star Alliance, and has various codeshare agreements in place. The airline also operates in a tactical partnership with its sister airline, Lufthansa.

Book your own flights online

As of May 2017, Fly Eurowings as it is sometimes erroneously searched for, serves a network of German domestic as well as several long haul flight routes. The airline’s domestic air hubs are situated at Berlin-Tegel, Cologne/Bonn, Hannover, Munich, Dusseldorf, Vienna, Stuttgart , Salzburg and Palma de Mallorca in Spain.

As of October 2015, the airline has also started serving air routes previously serviced by Lufthansa as well. The introduction of direct flights to Cape Town and possibly other destinations in South Africa form part of this strategic move. Flights to Cape Town are slated to launch on 5 November 2017.

An Airbus A330-200 aircraft will be deployed along this route on Sundays from Cologne, and on Mondays from Cape Town on the following flight codes:

Flight EW 126 is to depart Cologne at 15:00 every Sunday and arrive in Cape Town at 03:10 the following day; the returning flight ,EW 127 will leave the Mother City on Mondays at 04:40 and arrive in Cologne at 16:45 on the same day. These Eurowings flights will be operated using an Airbus A330.

It is expected that a low cost alternative flying directly to Europe will be very well received by Capetonians, whom typically need to stop over in Johannesburg on route to Europe. Eurowings will be one of several international airlines to start flying directly to Cape Town in recent years, a trend which has seen significant upliftment in the province’s income from tourism.

Passengers may carry one piece of hand luggage on board. Hand baggage may not weigh more than 8kg, with maximum dimensions of no more than 550 x 400 x 230mm.

IF you are flying on a Basic Budget fare ticket, you can pay a fee of €9 to €30 for a single bag of up to 23kg in weight. A second bag can be checked in for a fee of €75 to €150, depending on the bag’s dimensions and weight. The second piece of luggage may not weight more than 23kg either.

If you are flying on a Smart Standard fare ticket, you are allowed to check in one bag not weighing more than 23kg. A second bag may be checked in for an additional fee of €75 to €150, depending on weight and size, but not exceeding a total weight of 23kg for the second piece.

If you are flying on a Best Comfort fare ticket, you get 2 pieces of luggage of up to 23kg per bag included free as part of your fare. For a detailed description of the Eurowings baggage policy, click here.

As of the end of 2016, Eurowings had codeshare agreements in place with Lufthansa, Air Canada, All Nippon Airlines, Austrian Airlines, Swiss International Airlines, TUI Fly Germany as well as United Airlines. 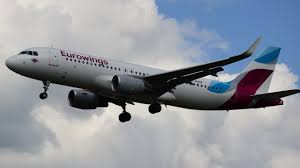 The airline is already advertising launch fares from 17 airports in Europe to Cape Town from as little as €259,99 – that’s approximately R3850, inclusive of taxes.

To check in for your next Eurowings long haul flight up to 72 hours ahead of departure, click here.

To track the progress and position of any long haul international Eurowings flight online, click here.