During the course of 2015, Thomas Cook Airlines transported an estimated 6.4 million passengers to destinations across the globe. In December 2016, return flights from the United Kingdom to Cape Town and Johannesburg were added to the airlines list of international destinations.

Acting CEO Christoph Debus is also the Chief Airlines Officer for the Thomas Cook Group, having joined Thomas Cook in 2012.

Thomas Cook Airlines was established, and began operations in March 2000. The airline has since been through several mergers, including that of Flying Colours and Caledonian Airways to form JMC Airlines. Soon after, Airworld Aviation Ltd was integrated into the group, and the company was officially renamed Thomas Cook Airlines UK, in March 2003.

Drinks and meals can be purchased in-flight from the Thomas Cook Airlines’ Café Cloud menu, put together by celebrity chef, James Martin. Passengers can also purchase gifts and tax / duty-free products from the brochure found inside the Thomas Cook magazine, Travel.

Passengers also have access to 24 radio channels and a large variety of music to listen to.

You can get a taste for the Thomas Cook A330 long haul flight experience in the video below:

Entertainment is supplied in the form of fixed screens which drop down from the ceiling of the aircraft, showing films or television shows, depending on the duration of the flight. Seats in these aircraft are fitted with a headphone socket and controls for up to 10 radio channels.

Thomas Cook has recently replaced their B757-200 aircraft with an updated and modern A321 Airbus’, kitted with yellow and grey corporate colours, slim design, fabric seats and leather headrests.

Economy class seats are set in a 2-4-2 configuration for all long-haul aircrafts.

Premium economy class is only available on long-haul flights and includes a 35-inch seat pitch, a 6-inch recline space as well as 20-inches of width for each seat, and a more spacious cabin with a 2-3-2 seat configuration.

Standard baggage allowance for economy class passengers includes 15kg for domestic flights, 20kg for long-haul flights and 23kg for flights to the United States. The airline also offers a “Flexible Trips” package, with a variance of between 0kg – 25kg, this amount will be specified on the travel documents.

Passengers travelling in a group can combine their baggage allowances, so long as any one suitcase does not exceed 30kg.

Premium economy passengers are allowed a baggage limit of 25kg, while those travelling to the USA are allowed up to 32kgs.

The Thomas Cook Airlines fleet is host to some of the most modern aircraft in the skies, these include: 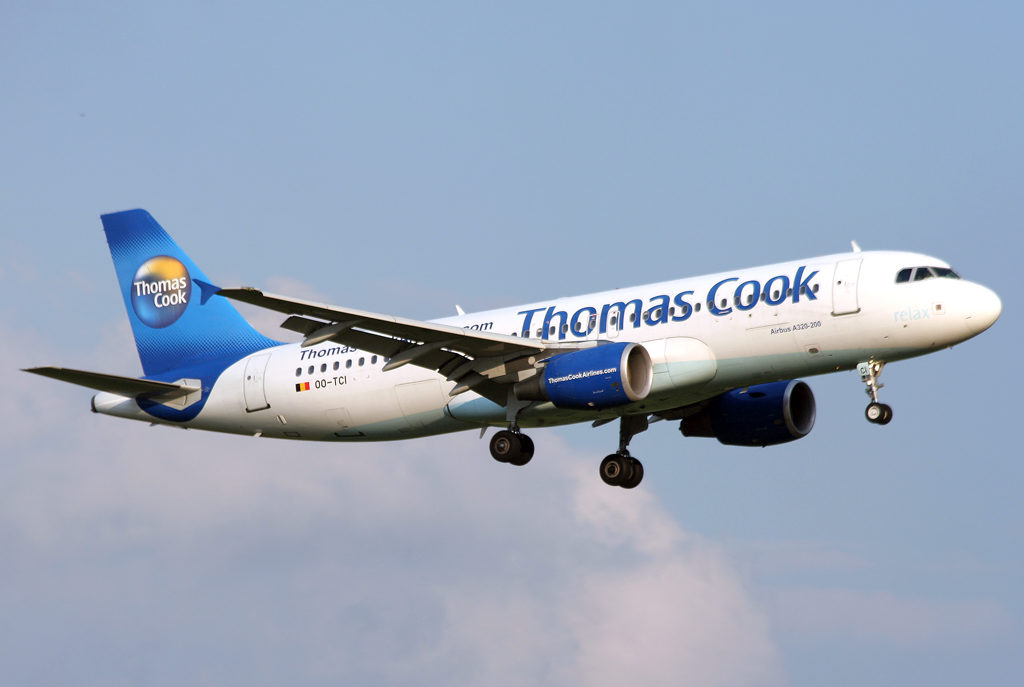 Passengers of Thomas Cook Airlines can sign up for the Miles & More program, in partnership with Condor. On all Condor flights, passengers can earn valuable air miles, which will be credited to their account upon presenting their Miles & More cards at check-in.

Thomas Cook In the News

As of December 2016, Thomas Cook Airlines added one of the world’s most spectacular destinations to its schedule – the city of Cape Town, South Africa. Running from 15 December 2016 – 20 March 2017, these flights will operate on Thomas Cook’s refurbished A330 fleet, departing on Sundays, Mondays and Thursdays. These are the first direct flights into the city of Cape Town from a UK airport, other than Heathrow.

Thomas Cook Airlines stepped in to assist with the emergency evacuation of close to 1,000 customers out of the West African nation of The Gambia, due to political unrest following the presidential elections held on 1 December 2016.

The country has been locked into a 90-day state-of-emergency by ousted president, Yahya Jammeh, and as such, the UK Foreign Office has strongly advised against travel to Gambia. Thomas Cook Airlines subsequently cancelled all commercial flights to this destination until further notice.