FLYAirlines puts Kulula Bookings and the cheapest domestic flights at your fingertips – 24/7, 365. Compare flight prices and book online, or find out more about how to book Kulula flights online here.

Book your own flights online

Getting the cheapest domestic flights online is super simple with FLYAirlines.co.za: With us, you get to be your own travel agent – 24/7, 365! Our state of the art flight booking engine is powered by Travelstart, so your booking is in safe hands. Simply type in your Departure Airport and Destination, as well as your preferred Travel Dates into the above search form to get started.

The system instantly compares the flight inventory of scores of international and domestic airlines to give you access to the lowest airfares in SA. So instead of having to shop around, you can instantly compare the likes of Kulula, FlyMango, FlySAA, Comair, British Airways, Fly Safair and FlyCemAir and book the cheapest flights between Cape Town and Johannesburg, Durban and Cape Town, Johannesburg and Durban, etc.

What’s more FlySafair has recently started flying to a number of additional regional routes too. You’ll also be able to book flights from Durban to PE, or from PE to East London, using the above search engine.

Founded in 2001, Kulula Airlines (www.kulula.com) is South Africa’s first low cost airline. The name Kulula means “It’s Easy” in isiXhosa and isiZulu. While Kulula Airlines is a trading name of Comair, rather than a standalone company, the airline operates scheduled passenger flights along most of South Africa’s major domestic flight routes. Its headquarters are situated in Kempton Park in Gauteng, and its primary air hubs are situated at Lanseria International Airport and OR Tambo International Airport.

As SA’s first true low cost carrier, Kulula operates on a no-frills / seat only basis. Beyond competing on the basis of really cheap flight prices, the airline has managed to build a reputation for reliability, 1-stop shop convenience and a really wicked sense of brand humor. The brand subscribes an ethos of “full-on travel”. They promote travel bundle deals and packages extensively; their site allows you to book cheap flights, rental cars, hotel accommodation or all inclusive holiday packages online.

Food and drinks can be purchased on board, enabling the airline to keep air ticket prices as low as possible. And their success in the market has been significant – Kulula flew their 5 millionth passenger during 2017.

As of June 2017, the airline services the following flight routes within and beyond South Africa’s borders: 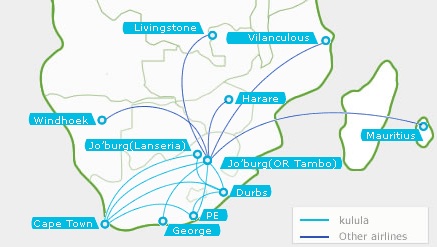 Flights from Cape Town to Durban 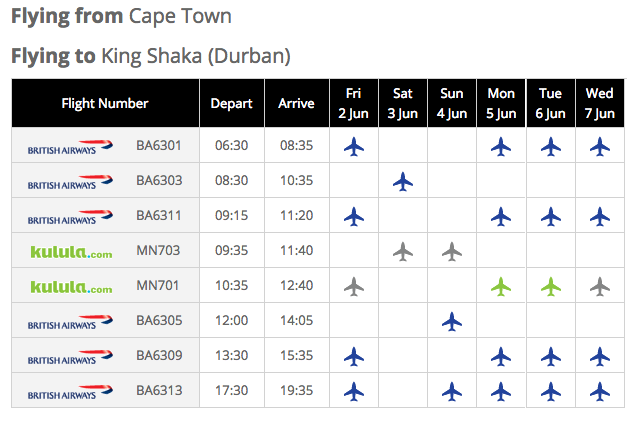 Flights from Cape Town to Johannesburg (Lanseria and OR Tambo)

Flights from Cape Town to PE 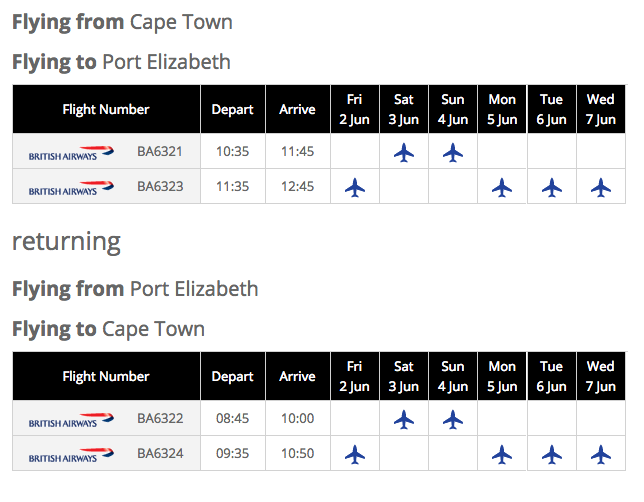 Flights from Joburg to Durban

Flights from Joburg to East London 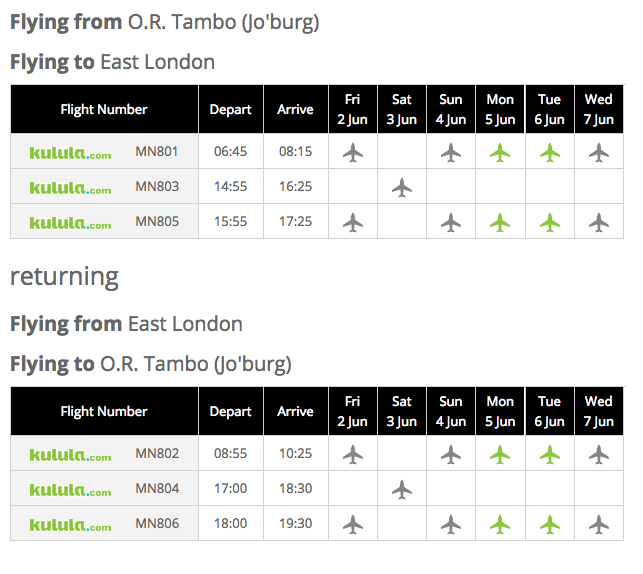 Flights from Joburg to George 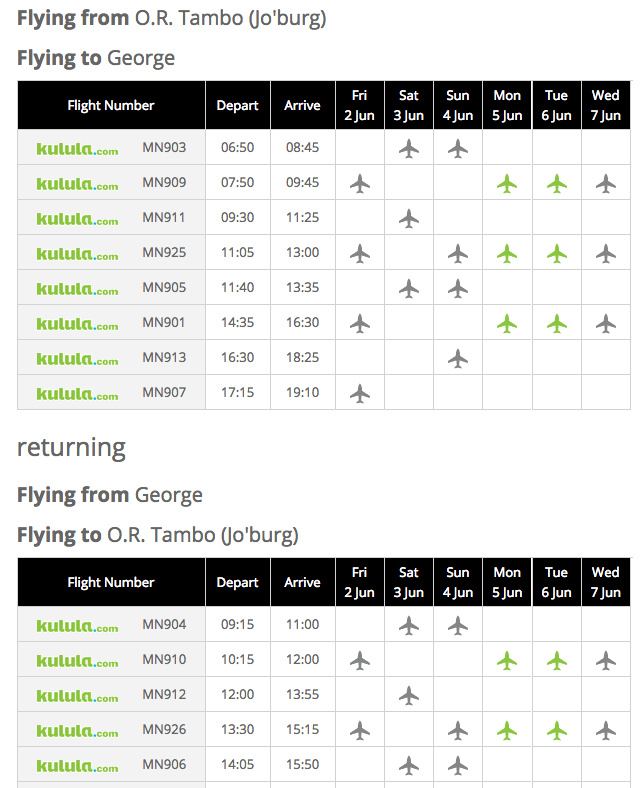 Flights from Joburg to PE

Kulula Economy passengers are entitled to carry one free piece of checked luggage, weighing no more than 20kg, and one piece of hand baggage weighing up to 7kg. In addition, you can carry a compact laptop bag or small handbag free of charge. If you need to carry any additional items, you can simply purchase an additional luggage allowance online or at the airport. Bags weighing more than 20kg, up to 32kg, will incur a heavy bag fee. Business Class passengers are entitled to carry up to 2 bags weighing 32kg each (maximum weight per bag).

Kulula has partnered with global travel rewards programme  Avios, so you can earn Avios points when making a flight booking on kulula.com. Members of Oneworld Frequent Flyer Member Programmes can also earn miles by booking British Airways (operated by Comair Limited) flights at kulula.com. Points are only earned once your flight has been flown. For more information, click here:

As of the middle of 2017, Kulula has codeshare agreements in place with Etihad Airways, Air France, Kenya Airways, British Airways and Comair.

Kulula competes with the likes of Mango Airlines, FlySAA and FlySafair along its domestic air routes.