Looking for cheap Comair flights? Instantly compare airfares and book online with FLYAirlines.co.za, or find out more about this leading airline here.

Comair Limited (www.comair.co.za) a leading local South African airline, operates scheduled passenger services along most key domestic air routes. The airline was founded in South Africa as Commercial Air Services in 1943. The airline’s primary air hub and headquarters are situated at OR Tambo International Airport in Johannesburg, from where the airline flies to 10 destinations countrywide.

The airline also operates its own low cost airline brand, Kulula.com. BA is also a stakeholder in Comair, bearing testimony to the strong relationship between the airlines. Comair South Africa has an unbroken track record of commercial success, having been profitable for over 60 consecutive years, and has an internationally recognised record for airline safety.

By 2014, the airline recorded annual revenues in excess of R6.2 billion, with profits of R265 million. During February 2017, the airline also won a court case against South African Airways, with the courts awarding Comair over R1 billion due to anti-competitive business practices by FlySAA. During 2016, it was also the first “big” airline to land in St Helena:

In early March 2015, the company advertised a luxury sale on their First and Business Classes, with flights from Johannesburg to London on sale from R41,155, and business class flights to New York on sale from only R53,270. Terms and conditions applied to these promotional airfares. During February 2017 into March 2017, the airline’s low cost brand, Kulula, was advertising one-way airfares specials from Durban to Lanseria in Johannesburg from only R419.03.

Comair, through its affiliation with BA, presently enjoys codeshare agreements with the likes of Cathay Pacific, Air France, KLM, Iberia and Kulula.com locally.

The Comair fleet consists of 18 Boeing 737s featuring the British Airways livery, with an additional 13 aircraft on order and scheduled for delivery in 2015, 2019 and 2022, respectively. The average aircraft age, as of January 2015, is 23.5 years. The fleet upgrades form part of a R3.5 billion fleet investment deal. The aircraft are valued at over $600 million at current prices, and and will feature the Boeing Sky Interior. 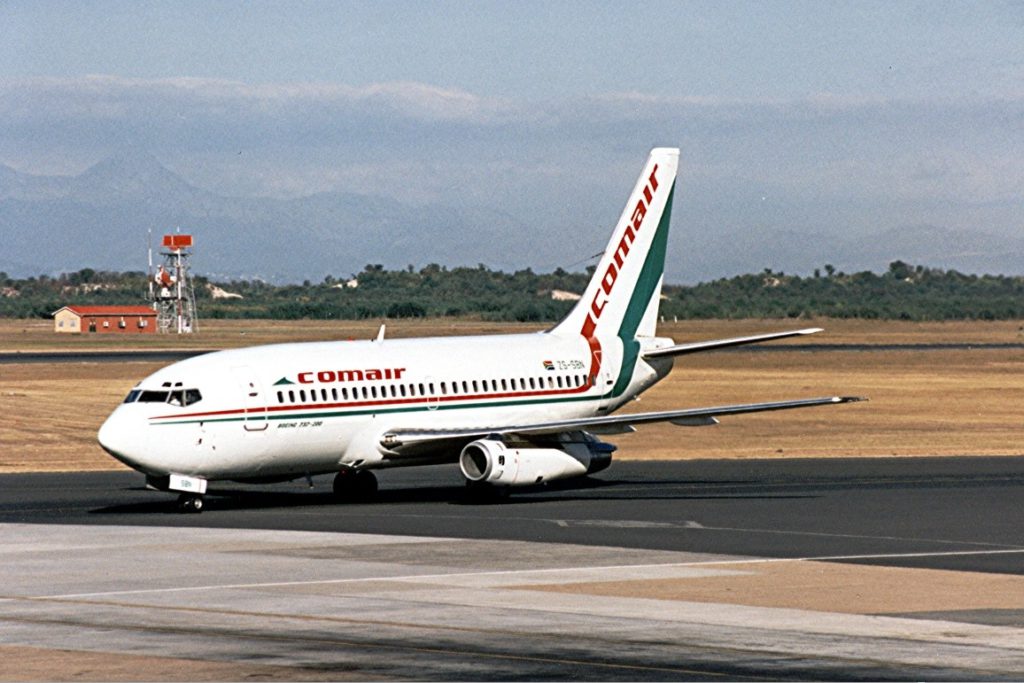 As of early 2012, (Economy Class) passengers aboard Coamair domestic flights in South Africa enjoy one free piece of checked baggage weighing no more than 23kg. Bags exceeding this will incur a Heavy Bag Charge of R250 at the airport. Bags weighting more than 32kg will not be accepted.

Business Class passengers enjoy a baggage allowance of two bags, weighing a maximum of 32kg each. Excess will incur a cost of R350 at the airport.

Infants are allowed one checked bag of 23kg, irrespective of cabin type. collapsible pushchairs and car seats are also carried free of charge.

Firearms and ammunition will attract a handling fee, and mobility aids for the aged or disabled and permissible medical devices will be carried free of charge.

Comair can be contacted at one of the below telephone numbers:

Booking your own Comair flights online

You can book your own BA domestic flights using the above flight search form, or call (011) 441 8600 if you wish to be assisted directly by one of the airline’s flight booking attendants. For more information on the airline, visit www.comair.co.za – NOT comair.com or flycomair.co.za.