Want to book cheap SA Express flights online? With FLY Airlines, you can compare flight prices and buy air tickets online within minutes. Use the accompanying form to book now, or read on to find out more about this express airline below.

SA Express (www.flyexpress.aero), or short for South African Express Airways, is an operationally independent subsidiary of South African Airways. The airline has been operating local and regional flights since 1994, and its flight routes form part of a strategic partnership with SAA and SA Airlink. The South African Government wholly owns South African Airline Holdings (Pty) Ltd, the SA Express holdings company. The airline is an affiliate member of the Star Alliance, via its parent company, SAA.

The airline has recorded financial losses in recent years, with previously published financial results being withdrawn in 2011 after accounting issues were identified that dated back a number of years.

SA Express faces competition from the likes of Kulula Airlines, Comair and more recently FlySafair along numerous of its domestic routes.

With its headquarters based at OR Tambo International Airport in Kempton Park, Gauteng, SA Express’ fleet of 29 aircraft presently flies to 19 local and regional destinations. The airline’s stated focus is to connect secondary flight destinations in SA.

Its core air hubs are situated at OR Tambo, Cape Town International, and King Shaka International Airport in Durban, however the airline also flies to Gabarone in Botswana, Lubumbashi in the DRC, Maputo in Mozambique, and Windhoek and Walvis Bay in Namibia.

The airline’s checked baggage allowance is as follows:

Any items weighing more is charged for separately per additional kilogram, however pieces weighing more than 32kg per piece is not accepted as excess baggage. Such pieces must be checked in as air cargo at the applicable rates.

As of 2017, the SA Express fleet of 24 aircraft comprises mainly of Bombardier CRJ200ERs, CRJ 700s and Bombardier Dash 8-Q400s; all ideal for non-long-haul local and regional flights. 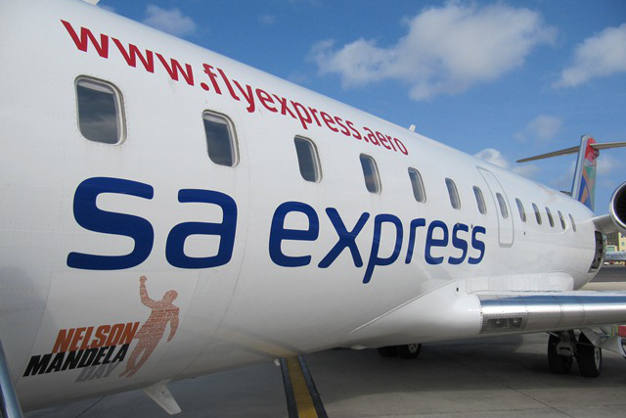 Use the booking engine to book your own Express air tickets now, or call to speak to one of our expert travel consultants.

Years of ongoing financial mismanagement has forced Government to consider a merger between SAA and SA Express to help gain critical operational and fiscal efficiencies. This plan was recently halted, but could still on the cards in 2017.