About TAAG Airlines in South Africa

TAAG has been operating flights to Cape Town and Johannesburg for a ndumber of years. Founded in 1940, TAAG (www.taag.com, NOT www.taag.co.za) today flies to 11 international destinations from Johannesburg and Cape Town, including Porto and Lisbon in Portugal via Luanda, as well as to Rio de Janeiro, Cuba, Chain, the UAE and Asia. You can also book TAAG flights to Buenos Aires, thanks to the airline’s code-sharing agreements. The airline is wholly owned by the Angolan government, and achieved its flag carrier status in 1975.

As of the beginning of 2018, TAAG Airlines is in codesharing partnerships with SAA, KLM, Air France, British Airways, Kenya Airways, LATAM and Royal Air Maroc, to name only a few.

TAAG ran incredible airfare specials during late 2016 and early 2017, with flights from Cape Town to Lisbon from only R3,850 return inclusive of taxes. This deal was arguable the cheapest flights from South Africa to Portugal or anywhere in Europe in at least a decade.

And given that TAAG’s Portugal bound flights only stop over in Luanda, Angola, for approximately 2 hours, TAAG is also one of the fastest way of getting to Europe, with flight times typically ranging between 12 and 14 hours. Only KLM’s direct flights to Amsterdam are faster, coming in at between 11.5 hours and 14 hours, depending on the exact flight you book.

So on flight time and price, TAAG is highly recommended – and especially when they’re running flight specials such could be the case on Black Friday 2018, with TAAG tickets bookable on www.flyairlines.co.za

But what about the TAAG flight experience..?

The author of this article has personally flown to Europe with TAAG on two occasions.

Nobody is going to enjoy Luanda International Airport; it’s a very disorganized, poorly ventilated place where dreams go to die. Everything is grotesquely overpriced, and only VISA credit cards are accepted. The shopping experience is basically non existent, with a view sad looking curio shops complementing the handful of sad restaurants and coffee shops present in the terminal building.

Smokers are expected to pay a US $10 fee to access the one and only smoking lounge, an even worse ventilated, dim and dingy bar that would not feel out of place as a bar scene location in a Mad Max movie.

Yet aboard a TAAG flight, it’s a different world. TAAG operates a modern fleet of Boeing 737s and 77s, and both the in-flight service quality and meals, compare very favourably to say a FLYSAA. The only obviously sub-standard feature is the relatively limited scope of the in-flight entertainment system. But that is literally all, and the fight is short and often overnight, so you’ll hardly notice. 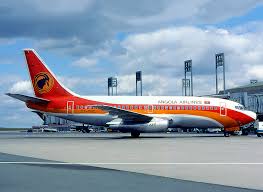 So yes. The Luanda stopover is typically vexing, but when you’re flying to Europe return for circa R6,000 and typically within less than 13 hours, one can forgive a lot. The airline’s economy offering is incredibly well priced, but it’s Business and Diamand First Class tickets’ pricing is far less competitive. If you’re looking for cheap business class flights to Europe, you may wish to check out Ethiopian Airlines instead.

TAAG, did, however, offer business class flight specials to Sao Paulo and Rio, starting from only R13,809 ex JHB in September 2018. Keep an eye on this page for the latest 2018 TAAG specials, especially in the weeks and days leading up to Black Friday 2018 on the Travelstart International Flights platform.

Instantly compare air ticket prices and boo your own online 24/7 with FLYAirlines, or for more information and the latest flight specials, sign up to our newsletter now.