Looking for cheap international flights on LEVEL Airlines? Instantly compare flight prices and book your own flights online, or find out more about FlyLEVEL here.

Owned by British Airways and operated upon launch by Iberia.com, LEVEL is a low cost startup airline specialising in transatlantic flights. Based in Barcelona and set to commence flight operations in June 2017, the airline will initially operate regular passenger flights to the US from as little as €99 (£86) one-way. The airline’s parent company, IAG, also owns Aer Lingus, British Airways, Iberia and Vueling, which means that Level will have great financial and operational backing.

Given the low-cost carrier model, meals, beverages, and baggage will be charged for additionally. In-flight wifi will also be available for a nominal fee of £8.99. The airline will be competing with the likes of WOW Air, Norwegian Air and WestJet along the north transatlantic routes, and is set to help give air passengers access to super affordable transatlantic flights and an ultra modern flying experience. The airline is creating up to 250 jobs upon launch. 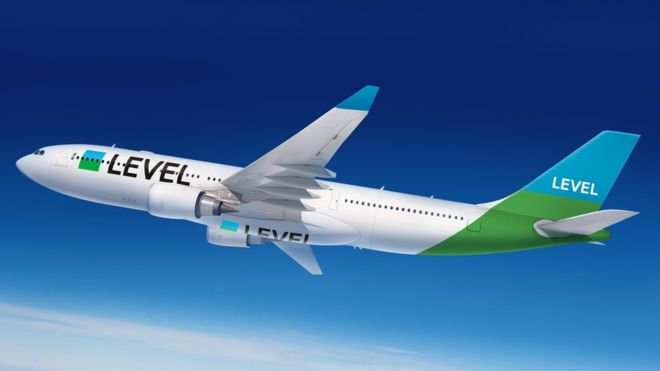 Level will have its own livery, and will offer 293 economy seats and 21 premium economy berths aboard its A330 aircraft. It will become the fifth of IAG’s main airline brands, and will help the company diversify their existing customer base significantly. The launch of Level emulates Lufthansa’s Eurowings initiative of using a lower-cost subsidiary to service less profitable routes.

The airline will be flying from Barcelona to Los Angeles, San Francisco, Buenos Aires as well as Punta Cana in the Dominican Republic, with plans to service more European destinations the near future.  The airline will fly to LA twice weekly, to Oakland (San Francisco) three times weekly, and to Buenos Aires in Argentina on a three times weekly basis. Flights to Punta Cana will be operated on a twice weekly basis, with Paris and Rome being considered as its bases.

Upon launch, the airline will operate a fleet of 2 new Airbus A330 aircraft, with plans to order more planes in due course.

Booking your own LEVEL Flights

Level flights are currently on sale at www.flylevel.com (NOT www.level.com or www.flylevel.co.uk). Alternatively, you can use the above flight booking engine to instantly search, compare airfares and book your own international flights online. Reservations are fully online only for the time being.