JHB to London DIRECT from only R6999, while seats last! Deal valid on Black Friday ONLY, lapses at midnight on 23 November. BOOK NOW!

Looking for the best deals on Virgin Atlantic Airlines’ flights? Instantly search, compare and book online with FLYAirlines, or find out more about Virgin Airlines here.

Virgin is the leading British airline, with its head office based in Crawley, United Kingdom. It operates out of both London Heathrow Airport and Gatwick Airport, servicing global destinations such as North America, the Caribbean, Asia, the Middle East and Africa, with flights landing at both Johannesburg and Cape Town International Airport.

Originally established in 1984 as British Atlantic Airways, intended to service flights between London and the Falkland Islands, the airline was established as Virgin Atlantic Airways after Sir Richard Branson joined its original founders, Randolph Fields and Alan Hellary.

Now owned by both the Virgin Group and Delta Air Lines, the airline’s maiden flight took place in June 1984 from London Gatwick to Newark Liberty International in the United States.

Virgin Atlantic flies to numerous global destinations, with daily flights in and out of both Johannesburg and Cape Town International airports. With their partnership with Delta Airlines, they also service close to 200 North American destinations, with 32 daily non-stop flights between the United Kingdom and the US.

Other primary destinations include South America, Asia, Europe, the Middle East and flights throughout Britain.

Virgin Atlantic allows travellers to choose their seats up to 331 days before their flight, for a small charge or depending on their Flying Club member status, free of charge. Online check-in opens 24 hours and closes 60 minutes prior to departure (destination dependent) and is accessible with a reservation and confirmation code, e-ticket number or frequent flyer sign in.

Operating a combination of Airbus and Boeing aircraft, the fleet consists of: 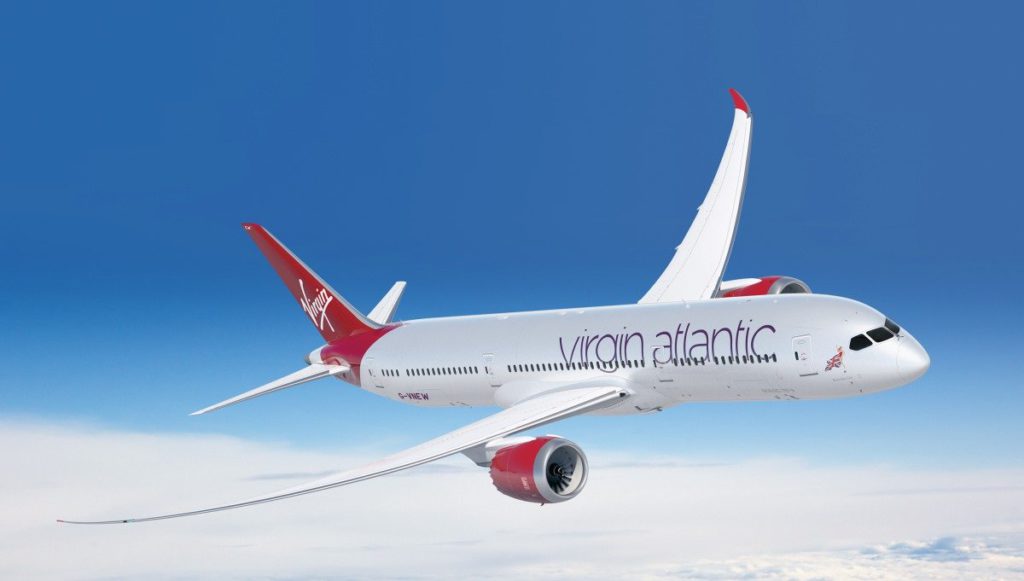 In 2012, Virgin Atlantic became the first airline in Britain to offer in-flight mobile phone calls, texts and web access while in the air. Additionally, an extensive in-flight entertainment system is offered, with a library of the most recent movies, televisions shows, music and games. The in-flight magazine, Vera, is also available in each seat back pocket.

You can get a sense of the Virgin Atlantic in-flight experience in the video below:

Economy class permits one bag per person, with a weight limit of 23kg. For flights from the UK to India, the US to India and US to South Africa, the baggage allowance is two checked bags per person, with a maximum weight of 23kg per bag.

Upper class allowances include three checked bags per person, restricted to 32kg per bag on all routes.

Hand luggage is restricted to one bag not exceeding 23 x 36 x 56cm in dimensions. While upper class passengers are permitted a 12kg weight limit and one additional garment or laptop bag.

Virgin Atlantic in the News

Check out the latest news articles featuring Virgin Atlantic below:

After President Trump’s 90-day travel ban was instituted, restricting seven Muslim countries and its citizens from travelling to and entering the United States, Virgin Atlantic has taken it upon themselves to offer these customers a full refund for their flights to the US. Customers are permitted to either re-book or receive a total refund on their flights.

Celebrating 20 years between Johannesburg and London