JHB to London DIRECT from R6,999 while seats last! Deal valid on Black Friday only, fare expires at midnight on 23 November…

Looking for the cheapest KLM flights from SA? Instantly compare airfares and book online with FLYAirlines.co.za, or find out more about this leading international airline here.

KLM (Koninklijke Luchtvaart Maatschappij) is the national carrier airline of the Netherlands. The airline’s headquarters is found in Amstelveen, but the company serves many international destinations, including South Africa.

KLM is also a SkyTeam alliance member and is under the management of President and CEO Pieter Elbers.

KLM was founded in 1919 by a group of eight Dutch businessman. Awarded a royal designation in September 1919, the first office opened in October of the same year, led by aviator expert Albert Plesman in his capacity as Director, and still operates under its original name. The airline was conceptualised after the completion and success of the Amsterdam ELTA Aviation Exhibition, sponsored and organised by Plesman in 1919. The very first KLM flight took place in May 1920 between London and Amsterdam.

After the death of Plesman in 1953, the airline, along with many others in the industry, entered tough economic times. Together with the stress of converting to jet aircraft, KLM suffered worrying financial issues. As a result of the financial burdens on the airline, the government increased its ownership to two-thirds in order to keep the airline in operation, effectively nationalising it.

In September 2003, KLM agreed to a merger with Air France to become Air France-KLM, but both airlines would retain their own branding.

KLM has 118 aircraft in operation and 22 on order. The fleet includes the following: 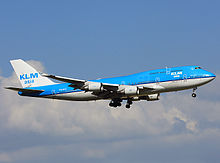 KLM has 3 main cabin classes for international and long haul routes as follows:

Passengers in South Africa and abroad can check in online from 30 hours to 1 hour prior to departure. The online system requires the passenger’s ticket number or booking code along with the flight number.

KLM flies to 2 domestic and 133 international destinations spread across 66 countries. The airline offers flights to and from both Johannesburg and Cape Town, in South Africa. In addition, the airline flies to Luanda, Buenos Aires, Melbourne, Sydney, Bahrain, Antwerpen, Brussels, Rio and Sao Paolo, a range of cities across Canada, China, Columbia And France, as well as London, Delhi, Budapest, Athens, Accra, Dublin, Tel Aviv, Rome, Milan, Nairobi, Windhoek, Amsterdam, Singapore, Dubai and Abu Dhabi, to name but a few.

You can get a taste for the airline brand in the video below:

Rather than focusing only on cheap flights, the airline positioned itself as a “full-on travel” solution, giving air travellers the ability to book, pay and travel without the need to deal with a travel agency.

KLM offers a frequent flyer program called “Flying Blue”. Loyalty miles are earned on flights as well as on hotel and car rental bookings. Miles can also be earned by shopping online at partner stores. Passengers can redeem miles by purchasing flights with KLM or any partner airlines. The number of miles required will depend on the selected destination.

KLM increases its presence in Africa; “With the addition of Freetown and Monrovia, KLM will be serving thirteen destinations in Africa in 2017. In this way, we will strengthen our position in Africa considerably and offer our passengers an even greater choice”, said CEO Pieter Elbers. The African network will include Windhoek Namibia, Luanda Angola, Johannesburg and Cape Town South Africa, Entebbe Uganda, Kigali Rwanda, Lagos Nigeria, Nairobi Kenya, Kilimanjaro and Dar es Salaam Tanzania, Accra Ghana, Freetown Sierra Leone and Monrovia Liberia.

KLM has finalised its deal to sell 49.99% of its Servair shares for a total of USD 248 million. The new board of directors took control of Servair (an on-board catering service company) on 1 January 2017. The shares were sold to GateGroup following HNA Group’s buyout of GateGroup for USD 1.5 billion last year.